The Noether theorem is a profound theorem in physics, relating continuous symmetries to conservation laws. The German mathematician Emmy Noether first proved it. Some famous examples include space-time translation symmetry and momentum-energy conservation, rotation symmetry and angular momentum conservation, internal U(1) symmetry and charge conservation. In quantum many-body systems, the discussion of symmetry can be more involved. For example, new symmetry that does not exist in the system can even emerge at low energy. Such a phenomenon generally occurs when the symmetry breaking terms are all irrelevant under the renormalization group (RG) flow in the field theory description. Do emergent symmetries also lead to emergent conservation laws?

A great platform to test these ideas is the deconfined quantum critical point (DQCP). The DQCP is an exotic quantum critical point between two spontaneous symmetry breaking phases: the antiferromagnetic Neel phase and the valence bond solid (VBS) phase. Deconfined degrees of freedom, such as fractionalized spinons and emergent gauge fluctuations, appear at and only at the critical point. The fractionalization generally enlarges the scaling dimension of order parameters and other symmetry breaking anisotropy terms (making them more irrelevant under RG flow), which paves the way for larger symmetry to emerge at the DQCP. Depending on the model details, the emergent symmetry can be O(4) or SO(5), which both involve rotation of the Neel and VBS order parameters to each other. 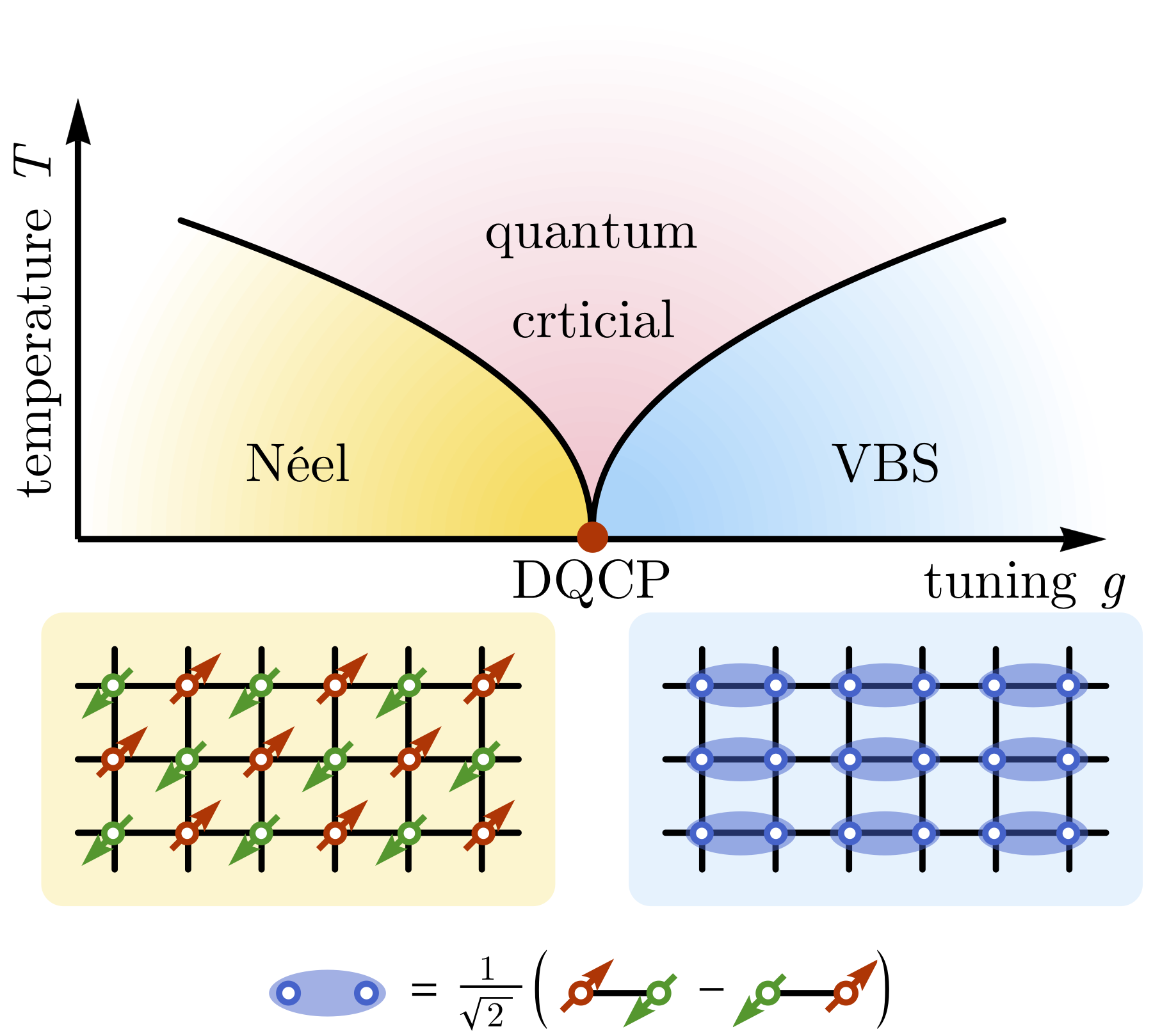 Two questions appear in front of us. First, where should we find the signal of the emergent conserved current in the low-energy excitation spectrum? Second, how to verify whether the observed current is conserved or not? In our recent work arXiv:1811.08823, we can identify the Neel-VBS current to be the spin fluctuation at momentum $(\pi,0)$ and $(0,\pi)$ by symmetry analysis and field theory argument. We then check the conservation of the emergent current by measuring its scaling dimension. In our large-scale quantum Monte Carlo numerical simulation, we observe that the scaling dimension of the current fluctuation is precisely consistent with the requirement of the conservation law. Therefore we confirm the emergent symmetry at DQCP by measuring the associated emergent conserved current in the spin excitation spectrum.

The proposal of detecting emergent symmetry by conserved currents applies to more general scenarios, such as low-dimensional analog of DQCP. In another recent work arXiv:1904.00021, we discover the U(1)xU(1) emergent symmetry of the Ising-DQCP in (1+1)D. Our theoretical and numerical study also guides the experimental search for the DQCP in quantum magnets. In particular, the Shastry-Sutherland magnet SrCu2(BO3)2 was proposed to be a candidate material that could potentially realize the DQCP under pressure. In our latest work arXiv:1904.07266, we provide supporting evidence for the emergent O(4) symmetry and point out the unique spectral features originated from the corresponding emergent conserved currents. Experimental detection of these spectral signals would further deepen our understanding of exotic quantum phase transitions and quantum spin liquid.