When two periodic lattices lie on top of each other with a relative twist or a mismatched lattice constant, they can interfere to create a Moire pattern. As shown in the following figure, a Moire pattern has a spatial structure on a larger scale than either of the lattice along. The (quasi)periodic pattern forms a larger lattice, known as the Moire superlattice. Experimentally, the Moire superlattice can be realized by stacking 2D materials together, including graphene, hexagonal boron nitride (hBN), molybdenum disulfide and many others. Exciting new physics can emerge on Moire superlattices, including Mott insulators, unconventional superconductors and possibly new topological phases. 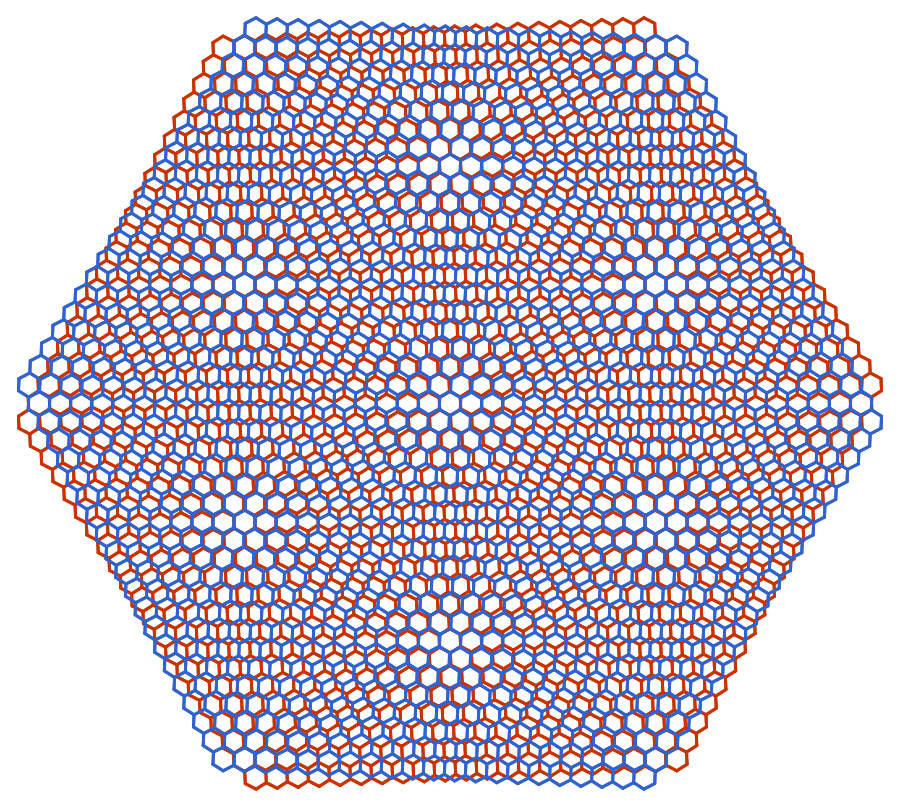 A simple intuition is that as the lattice length scale increases, the electronic matter wave also propagates at a longer wave length on the lattice, which corresponds to a lower momentum. Since the kinetic energy of the electron positively correlates with its momentum, the reduced momentum on the superlattice implies a reduced kinetic energy. This makes the interaction energy relatively more important compare to the kinetic energy, resulting in the enhanced interaction effect among the electrons. In fact, band structure calculations reveal that at certain twist angles (known as the magic angle), the electronic band near the Fermi energy can become very flat. This opens up a platform for strongly correlated quantum many-body physics to take place.

Typically there are two approaches to handle these correlated electronic systems: one is the weak coupling approach that start with the electronic band structure and add in interaction perturbatively, another is the strong coupling approach that start with the clusters of electrons with strong local interaction and try to connect them together virtual tunneling processes. In a recent work (arXiv:1805.06867) with Ashvin Vishwanath, we propose a low-energy effective theory for twisted bilayer graphene and follow the weak coupling approach to analyze the leading ordering instability including the possible pairing symmetries. My group is also actively exploring from the strong coupling approach to gain a more comprehensive understanding of the correlated physics in these Moire superlattice systems.